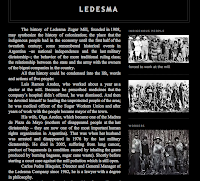 My name is Rachel Corrie
(director and set designer)
info in Spanish: 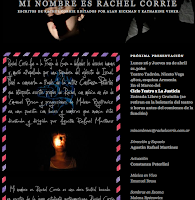 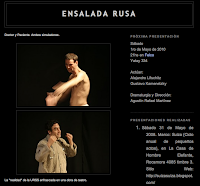 Men and Things
(author and director)
info in Spanish: 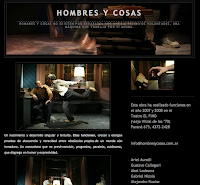 if you want to read Operaria you can request it by writing to operaria@agustinrafeal.com.ar
Home
Subscribe to: Posts (Atom)
Volver a la versión en Español

Agustín Rafael Martínez is a theater director and playwright from Argentina. He is a graduate from The School of Dramatic Art of Buenos Aires, Playwright Career, coordinated by Mauricio Kartún. He has studied with Ricardo Bartís, Rubén Szuchmacher, Alejandro Tantanian, Mauricio Kartún, among others. He´s author, among other works, of Operaria, edited by the National Institute of Theater (Argentina), Men and Things, staged in 2007 and 2008 under his direction and Russian Salad, staged from 2008 until now under his direction. In 2009 directs also My name is Rachel Corrie with great impact in the media and awarded by the Festival for Justice. Contact: agustincico(a)gmail.com